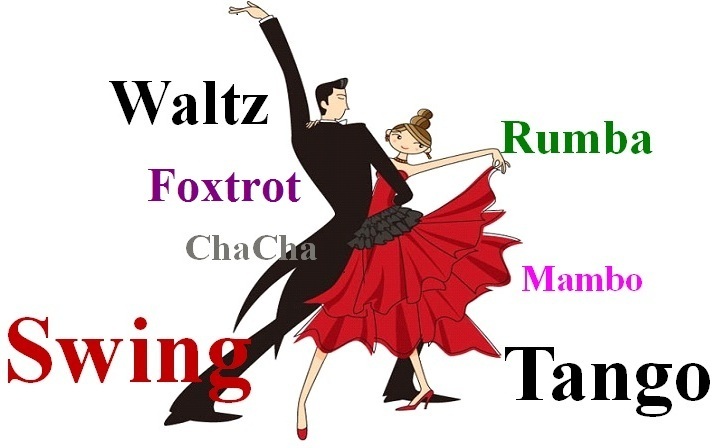 Cha Cha originates from Cuba so most often it is accompanied by authentic Cuban music. In ballroom competitions it is most often danced to rock or pop music. The ballroom music for Cha Cha has high energy and contains a steady beat. This Latin dance may also involve complex patterns.

East Coast Swing is a form of social dancing. It falls under the group of Latin dances. Swing is accompanied by upbeat music usually with a fast tempo. Examples include Do-Wop, Big Band, & Jitterbug. Today East Coast Swing’s basic step consists of 6 counts. These moves can be timed to work with an 8 count, which allows you to dance certain ECS moves to Charleston, Balboa, & Lindy Hop. The East Coast Swing is a Latin or Rhythm dance and all rules of Latin hips and hip motion apply in this dance.

The Foxtrot is a “Smooth” dance that comes to the ballroom floor. It is also a progressive dance that is made up of extended strides that seamlessly move across the dance floor. The music is usually from the era of WWII, the USO or the Big Band. Even though the Foxtrot looks similar to the Waltz, the timing among many other things, is much different. This dance debuted in the 1910’s and through Fred & Ginger, has made its way to today’s “Dancing with the Stars” and remains just as popular as ever. Most Foxtrot songs can also be danced as an East Coast Swing.

The Rumba came to America in the form of Big Bands in the 20’s & 30’s. There was a movie that was released in the mid-1930’s called “The Rumba”, and this one feature brought national attention to what was once a small romantic dance. The American style or version of the Rumba is learned in the basic box step.

The Tango is made up of a diversity of styles that have evolved in different areas of Argentina as well as in other locations around the world. This dance was concieved in response to many examples of the Latin culture. Few Tangos are danced in open embrace, or where the lead and the follower have space between them. Closed position is when the man and the lady are connected in the upper torso, as in the Argentine Tango. Finally, in the American Tango, the lead and the follow are connected in the core or abdominal area.

The Waltz has a very specific signature beat. The beat or timing is 1,2,3, 1,2,3, etc. This 3 count pattern is constantly repeated during the dance. The Waltz is usually performed in a standard triple time and is almost always danced in a closed position. “Closed” position is when the lead and the follow are connected together in the abdominal area. Very accommodating music for this dance can be found on most channels of the radio. rock & pop music, many country songs, classical, and even inspirational music contain the common 3 count used in the Waltz.